Questioning Ecologies of Co-Existence through
Converging Collaborative Resonances and Dissonances

Through collaborative expression between an artist, composer, anthropologist, and architect, the “Cosmo-Eggs” project reconsiders the nature of the world we inhabit and presents an experimental platform to imagine a possible ecology of co-existence between humans and non-humans.
The Japanese archipelago, a region afflicted by frequent natural disasters, experienced a modernistic distortion in the form of a nuclear meltdown following the large tsunami of the 2011 Great East Japan Earthquake. At the beginning of the twenty-first century, as capitalism (in the form of ever-accelerating global corporate activities) seizes the entire planet, debate has flared up regarding the arrival of the so-called “Anthropocene,” a geological era named for the profound influence of humanity’s rapid expansion on earth’s geology and ecosystems. How are we to think of the massive impact on earth’s environment caused by the human species which—seen in perspective—inhabits only the thin surface layer of the planet?

The starting point of this project is Motoyuki Shitamichi’s series of Tsunami Boulder, which he documented for several years after encountering them on the Okinawan island chains of Miyako and Yaeyama. Tsunami boulders are large stones carried ashore from the depths of the sea by the power of tsunamis. They exist in close proximity to places of human everyday life; plants flourish on and around them, and migrating bird colonies use them as places to rest and nest. Each of these boulders provides a platform for an ecology of co-existence between human and non-human life.
Music composer Taro Yasuno’s Zombie Music, an automatic performance piece in which recorder flutes are played without the use of human breath, sounds similar to bird-song. Large balloons, protruding into the exhibition space from the pavilion’s pilotis, take over the function of human lungs and provide the air necessary to play the recorder flutes. The resulting musical piece, titled COMPOSITION FOR COSMO-EGGS “Singing Bird Generator,” complements the Tsunami Boulder videos playing in the exhibition space.

The project’s title “Cosmo-Eggs” is rooted in a motif present in many mythological stories from around the world. Both eggs and stones—as round objects—figuratively represent a cycle, a recurring period, and eggs—with their brittle shells—express the ambiguous relationship between creation and destruction. Anthropologist Toshiaki Ishikura, who specializes in folkloristic mythologies, wrote a new mythological story which references common tsunami-related mythological stories told in Taiwan, the Ryukyu islands and other places in Asia, and questions the relationship between humans and non-humans.
The Japan Pavilion, designed by Takamasa Yoshizaka in 1956 and reminiscent of Le Corbusier’s “Museum of Unlimited Growth” (1931), combines a square layout with a skylight window at its center, a hole in the floor directly below it, and four columns arranged in a spiral layout around the periphery. With careful thought, architect Fuminori Nousaku’s design connects each of these distinct, dissimilar artworks with each other and establishes a responsive relationship between them and the architecture, forming an integral experience of the space.
The Tsunami Boulder videos each loop at their own distinct intervals while the COMPOSITION FOR COSMO-EGGS “Singing Bird Generator” piece continues to change and evolve as a result of its automatization processes. Within the exhibition space, with its numerous co-existing and intermingling stories, no same moment ever visits twice. The visitors experience a succession of unique instants created by the overlapping combinations of video, music and words within the space of the pavilion.
There will be times when music and video resonate to a surprising degree, and even moments when the entire space will seem to vibrate in unison. Conversely, there will also be moments of complete dissonance between each individual element. Visitors will not only encounter harmonization and pleasant fusions, but also occasionally be faced with harsh conflict.

As these distinct creative works, produced by collaborators with differing skills and expertise, are free to converge as they are, the exhibition itself takes on a role similar to the tsunami boulders and their symbiotic ecologies. Through its acts of true collaboration, “Cosmo-Eggs” enables a space of continuous creative evolution beyond the limits of simple resonance, and questions fundamental ecologies of co-existence and symbiosis. 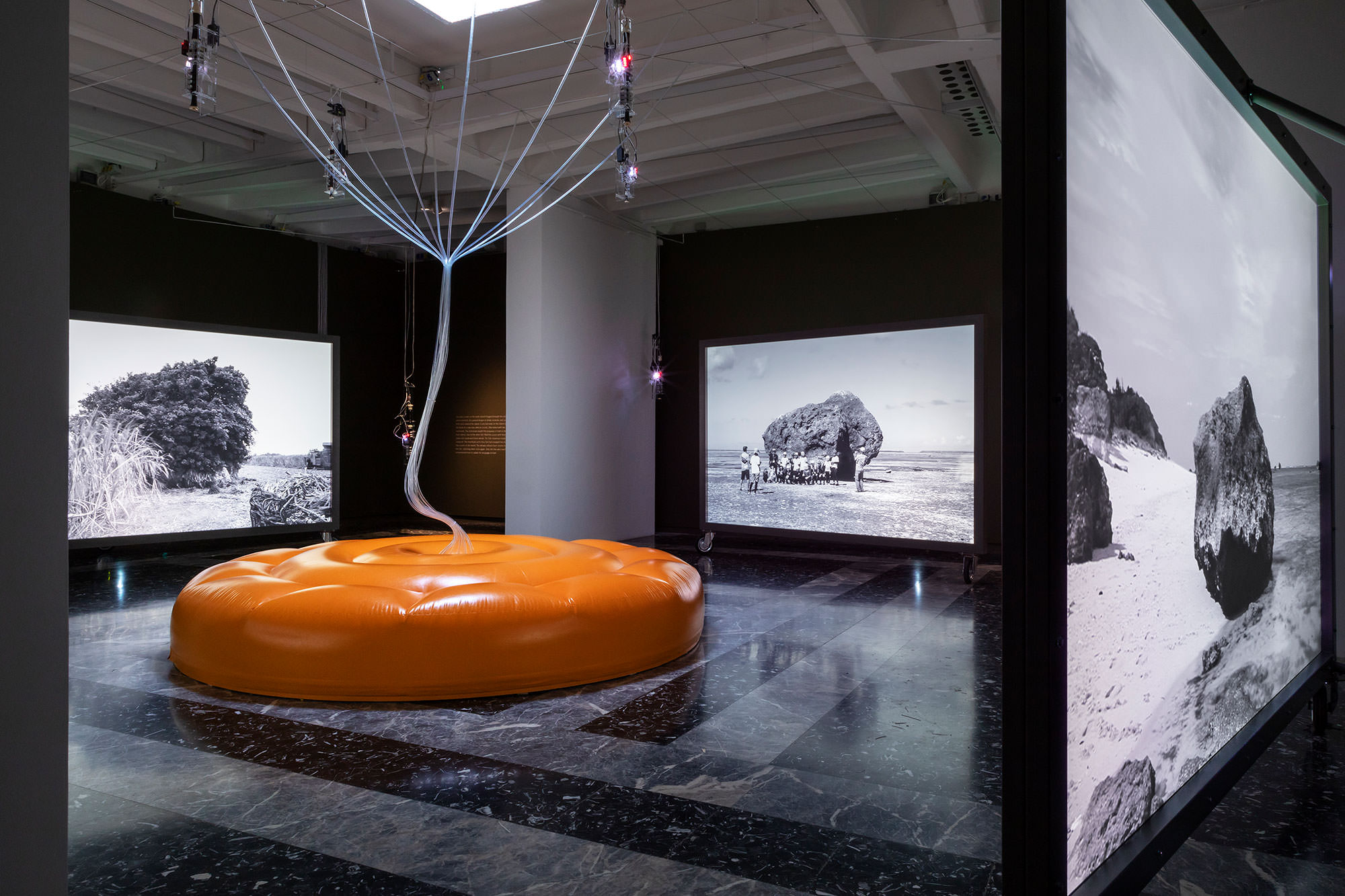 A long time ago, sun and moon descended to earth and laid a single egg. A snake came and swallowed the egg, and so sun and moon visited earth once more to leave behind three eggs that they hid: one inside earth, one inside stone, and one inside bamboo. The eggs soon hatched, and born were the ancestors of three islands. Once grown up, they each built a small boat and travelled to different islands: one in the East, one in the West, and one in the North. The tribes of these islands visited each other by boat, and despite occasional fights, they overcame pestilence and poor harvests to live in peace for a long time. Each island passed down its own language, its own music, its own traditions, its own festivals. They each possessed the power to speak with the animals: the earth tribe spoke with the worms and the insects, the stone tribe with the snakes, and the bamboo tribe with the birds.

One day, a man on the earth island foraged through the stones of a river and caught a catfish. In the same moment, the ground began to shake violently, and seething hot springs and boiling lava gushed forth and covered the island. Every last man on the island died that day, but a woman who had fled into the back of a cave was able to survive. She mated with the fish of the sea and gave birth to the mermaids. The mermaids taught the language of man to the creatures of the sea. Turtles and crabs kept their silence, but all the other fish filled the ocean with their noise. The sharks, disturbed in their sleep, came and swallowed them whole. The fish dissolved inside the sharks’ stomachs and turned into seaweed. The mermaids and a few fish had escaped the sharks and now wandered aimlessly through the oceans of the world. The whales offered them shelter but in return took man’s language away from the fish, silencing them once again. Only the fish who had hidden inside the whales’ baleens remembered how to speak the language of man.

On the stone island, a youth slept and in his dreams saw a flock of white birds drop giant boulders down from the skies and into the fields. On the seashore the next morning, he caught a fish that knew the language of man. It begged him not to be eaten, and so the youth made to return it to the sea. But the father who had watched the youth took the rare fish from him and, as a lesson, decided to eat it. The fish cried out for help, and from the sea arose a tremendous tsunami. Like a swan spreading its wings the tsunami swept over the island, and the enormous wave swallowed all living creatures. It left behind boulders covered in corals, and the animals it had drowned became hermit crabs. The youth, however, had fled with his sister to the island’s highest mountain and, clinging to a rock, the two barely survived. They were able to overcome starvation, and brother and sister coupled and gave birth to new offspring.

Near the bamboo island, a giant sea snake covered the hole on the ocean floor. The water rose higher and higher, until the sea flooded the island. Some of what the sea had swallowed was turned into coral reefs. A giant crab rose from the bottom of the ocean, it cut the sea snake with its claws, and finally the sea could recede again. A girl gathering firewood had survived the flood inside a forest on the hills. One morning, as she collected rainwater in a bamboo bowl, a red bird appeared and landed on a tree before her. It wrapped itself with the rays of the sun and flew away. When the girl later went to relieve herself near a river, one by one twelve eggs dropped out of her. The girl hid the eggs underneath a giant boulder in the North, carried there by a tsunami long ago, and covered them with leaves and grass. When she peeked underneath the giant boulder again a few days later, she found twelve children had hatched from the eggs and were playing with each other. The children scattered into each of the twelve cardinal directions. When it became spring, migrant birds gathered from all twelve directions, and they found rest on top of the giant boulder.

Born 1978 in Okayama, Shitamichi earned his BFA in painting from Musashino Art University in 2001. He mounted solo exhibitions at the Toyota Municipal Museum of Art Library in 2015 and Kurobe City Art Museum in 2016, and has participated in international and group exhibitions including Gwangju Biennale 2012 (Korea), Asian Art Biennial 2013 (Taiwan), Aichi Triennale 2013 (Japan), Okayama Art Summit 2016 (Japan), and ESCAPE from the SEA (Malaysia, 2017). He was a recipient of the Noon Award for Emerging Artist at Gwangju Biennale 2012 and the Photo City Sagamihara Award for Emerging Professional Photographer in 2015.
http://m-shitamichi.com/

Born 1979 in Tokyo, Yasuno earned his BMus in Composition at Tokyo College of Music in 2002, and MA from the Institute of Advanced Media Arts and Sciences in 2004. He was a research assistant from 2008 to 2010 in the Department of Musical Creativity and the Environment at Tokyo University of the Arts, and currently the part-time lecturer at Nihon University College of Art and Tokyo Zokei University. He held the solo exhibition / concert Dance Macabre (Kyoto Art Center, Japan, 2014) and The Mausoleum II (BankART, Japan, 2017). He has participated in group exhibitions and festivals including Tokyo Story (Tokyo Wonder Site, Japan, 2015), Zombie Opera “Dance Macabre” (Festival/Tokyo 15, Japan), Our Masters: Tatsumi Hijikata / glossolalia (Asia Culture Center, Korea, 2016) and Radio Azja (Teatr Powszechny, Poland, 2017). He took first place in the 7th JFC Composing Competition in 2013 and was the recipient of the Genichiro Takahashi Prize at Art Award In the CUBE 2017 and honorable mention at the KDCC 2018.
http://www.taro.poino.net/

Born 1974 in Tokyo, Ishikura completed his credit requirements for the doctoral program at Chuo University Graduate School of Policy Studies in 2010, thereafter leaving the school. He was a research assistant from 2009 to 2011 in the Institute for Art Anthropology at Tama Art University; has been a researcher at the Institut pour la Science Sauvage at Meiji University since 2011; and from 2013 to 2016 was a full-time lecturer at Akita University of Art, where he has been an associate professor since 2017. His co-authoring publications include Yasei meguri: Retto shinwa no genryu ni fureru 12 no tabi (Tours for the Wilderness: Field Notes and Dialogues from the 12 myths from the Japanese Archipelago) (photographs by Masaru Tatsuki; Tankosha 2015) and Lexicon Contemporary Anthropology, (co-editor Katsumi Okuno; Ibunsha, 2018), among others.

Born 1982 in Toyama, Nousaku earned his Dr.Eng. at the Tokyo Institute of Technology Department of Architecture and Building Engineering in 2012. He worked with Njiric+Architekti (Croatia) in 2008, and established Fuminori Nousaku Architects in 2010. He was as an assistant professor at Tokyo Institute of Technology from 2012 to 2018, and has been an associate professor at Tokyo Denki University since 2018. Noted works include Guest House in Takaoka (Japan, 2016), Bamboo Theater (the Philippines, 2017) and Holes in the House: Urban Wild Ecology (Japan, 2017-). He was awarded the SD Review 2013 Kajima Prize, Special Mention for the Japan Pavilion at the 15th Venice Biennale International Architecture Exhibition in 2016, and shortlisted for SD Review 2017.
http://fuminori-nousaku.site/

Born 1978 in Aichi, Hattori earned his MArch from Waseda University in 2006. He was curator at the Aomori Contemporary Art Centre at Aomori Public University from 2009 to 2016, and has been an associate professor at Akita University of Art since 2017. Hattori explores the relationship between art and public space through exhibitions, research and projects carried out mainly in Asia. Recent curatorial projects include Media/Art Kitchen (Indonesia, Malaysia, the Philippines, Thailand, Japan, 2013-14), Aichi Triennale 2016 (Japan), ESCAPE from the SEA (Malaysia, 2017), and Going Away Closer (Cuba, 2018). 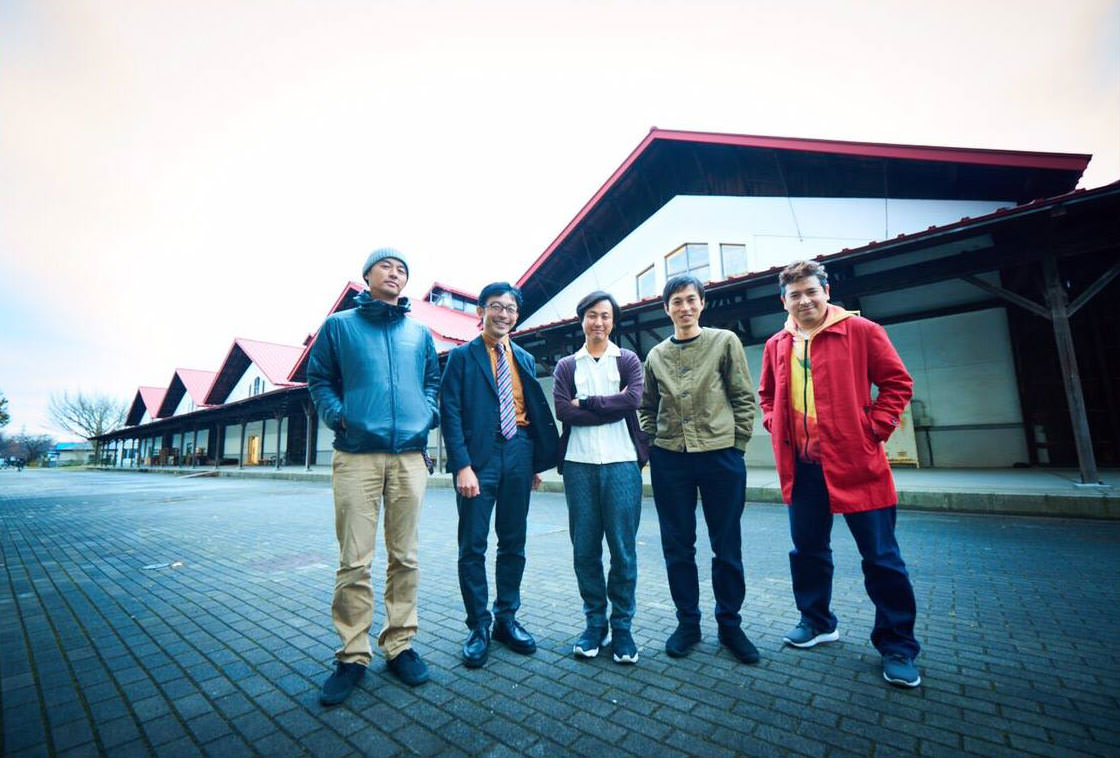